No task is too great for the clever Monkeys. They master most anything. They have extremely charming manners that draw others. Monkeys solve difficult problems with ease.

They are quick-witted, innovative, and they have total and intense belief in themselves. No one delights in their own accomplishments like the Monkeys. Enjoying themselves immensely, they try anything at least once! Monkeys are intellectual and their memory is phenomenal.

They recall the smallest details of everything they have seen, Read, and heard. They must depend on that memory since they have an otherwise untidy mind. Monkeys are wizards with money. They are original, shrewd, and when they need to, they can fool anyone. There are a hundred and one fantastic schemes they want to try, and you can bet they make some of them work.

Even when they take you in, it is hard to be angry with them, or begrudge them anything. They don’t care what opinions others have of them. They know they are lucky, and they also know they have the ability to change things when convenience calls. Monkeys are virtually unsinkable! When the odds are stacked against them, Monkeys know when to quit. Their timing is superb, and they will wait to try another time. If you try to trick Monkeys, they will probably catch you. They never make a move without a plan. They are great strategists. They can spot an opportunity in any form. They never miss a trick!

Monkeys are hard workers once they have a piece of the action. The bigger the piece, the better they do. Monkeys like to travel, and they want to do it first class. They need a certain amount of excitement in their lives. 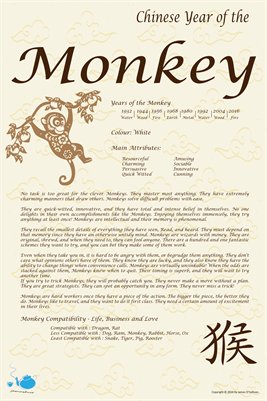